Last week, we were very happy to help TREK Development celebrate the completion of Mellon’s Orchard South and break ground on a second complex, Harvard Beatty Housing, together representing $27 million worth of affordable housing units in the neighborhood!

“It’s important to have partners work together to achieve the vision of our communities and to meet the needs they define like East Liberty did in their community plan,” said Peduto. “These projects represent the brick and mortar affordable housing we need, but they also represent investment in our most important assets – our people, our businesses and their visions. I’d like to thank all of our partners who have made these projects a reality and especially thank ELDI and the Penn Plaza Support and Action Coalition for their most important contributions to its success.” 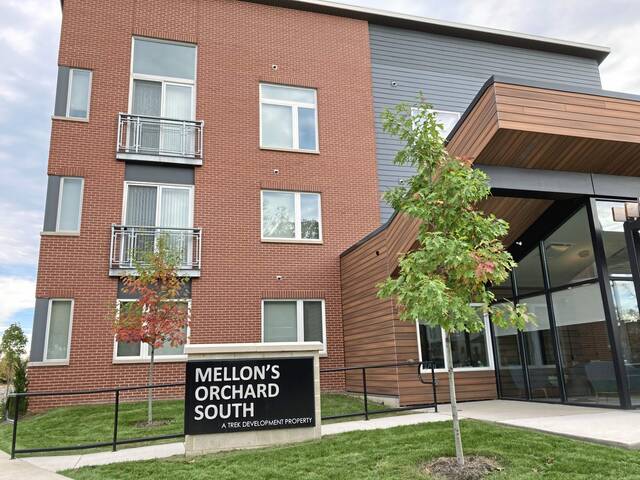 For Mellon’s Orchard South, 37 units will be affordable, 10 will be market rate, and eight are reserved for HACP project-based voucher holders. There are six handicap-accessible units and one unit for people with a sensory impairment.

Harvard Beatty Housing, which is replacing a parking lot at the end of the East Liberty business district directly across from Mellon’s Orchard, will have 42 apartment units. Of those, there will be 33 affordable units, nine market-rate units, and eight units for HACP project-based voucher holders. The units should be completed by late next year.

➡ Learn more about how these units came to life.

➡ Learn more about the celebration + watch a video from the groundbreaking